Without Jesus, Haiti cannot be delivered

“It’s so ENCOURAGING to see/hear how God is moving in a mighty way in Haiti, bringing “beauty from ashes. This is an excerpt from a former Haitian missionary.

The outpouring of prayer from the Haitian people for their own nation puts all the years of many missionaries & Haitian believers patiently plowing, planting, cultivating, watering, feeding & praying (sometimes with discouraging setbacks) into perspective – just a brief moment from God’s point of view! You’ve been blessed to see firsthand what many missionaries and Haitian believers and friends of Haiti have been hoping and yearning and praying for a lifetime!"

Live on faithfulness to God in Haiti...Praise the Lord

In Haiti the tradition of Mardi Gras is to have a huge celebration, three days of ceremony much that is not God honoring. This year in light of post earthquake miracles the three day feast and party became a three day fast and prayer vigil. God knows and answers the prayers of His people.This year it was entirely different. “The sounds of Christian music and worship filled the air everywhere, there was NO traffic. Port-au-Prince streets are always clogged and overflowing with bumper to bumper traffic. This morning there were only a few vehicles on the roads, a few small buses (tap taps), some UN and military vehicles, and a few private cars. The only place that there were traffic blocks was in front of several churches where the congregations had overflowed the buildings, and the yards and had moved out into the streets as well. 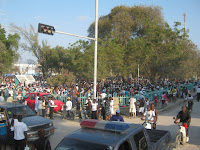 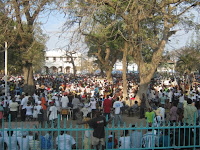 The shops and street vendors were all closed. There were no intercity buses running. Whereas the sidewalks are usually overflowing with millions of street venders, we only saw a few here and there. The huge outdoor market near the wharf where thousands work each day and spread out to cover most of the street, was EMPTY. Where were all the people? They were in churches and makeshift meeting sites. Every church had services going on, almost always overflowing into the streets.

"Can people still say that Haiti is a voodoo country?"

We pray that You Lord....will awaken and claim the hearts that within the sound of Your name.... in each neighborhood of Haiti ...will foster a cry out for You! We as a body of Christians know of Your unending love, mercy and grace and stand together in faith for the things unseen.

Now faith is the assurance of things hoped for, the conviction of things not seen. And without faith it is impossible to please him, for he who comes to God must believe that He is and that He is a rewarder of those who seek Him. Hebrews 11 V1-6

Posted by Colleen and Jussi at 2:44 PM No comments: 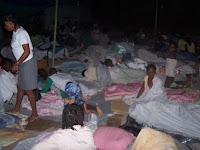 This is the story of post earthquake Haiti and our Haitian family, Karly, Carline and T Mac. The story of how one sees a need, recognizes the part they are to play and gives their "yes" to God to feed the hungry, the widows and the orphans.
After the earthquake and the reality of 28 aftershocks hit the city of Port Au Prince, it was from our North American perches impossible to fathom where to start. Many agencies on the ground had set up temporary shelters, tried to sort through the rubble and find those that God had chosen to be His "miracles". The many stories of miracles, of sadness, the photos of terrified children and anquished parents came into the living rooms of the world in a short 24 hour period and continued for days and weeks. We sat and prayed and joined in with the those that had family in Port and tried to get news about their safety. It was a long 26 hours, ones that humbled us, were shared in tears by others and gave us insight into God's amazing grace to allow us our own processing time and to hear our prayers. We were blessed with news via, via, via, different people that all of them were safe. Countless others were still waiting and we joined an exodus of people posting and praying for those that still did not have any news.
Karly and Carline used some of the money that he had for school and started to buy food and water, blankets, tarps and whatever else they could to help the more than 120 people that were wandering in their neighborhood. After nights of unimaginable heartbreak, terror at the aftershocks, powerlessness to help more, God used Karly to share the message of His goodness and grace, His mercy, His love and His steadfastness in times of turmoil.
It has been a month since the first earthquake hit Haiti and as we hear from Haiti daily, it is a time to start rebuilding. A month later and Karly and Karline are still feeding 80 people, women and children with no where else to go. God calls us to ministry in the places where others will not or cannot go...Matthew 10 v 42 and 25 v 40 The Message
Don't begin by traveling to some far-off place to convert unbelievers. And don't try to be dramatic by tackling some public enemy. Go to the lost, confused people right here in the neighborhood. Tell them that the kingdom is here.

We are intimately linked in this harvest work. Anyone who accepts what you do, accepts me, the One who sent you. Anyone who accepts what I do accepts my Father, who sent me. .... This is a large work I've called you into, but don't be overwhelmed by it. It's best to start small. Give a cool cup of water to someone who is thirsty, for instance. The smallest act of giving or receiving makes you a true apprentice. You won't lose out on a thing."
What a gift it is to be the giver...On the last day He will say to those on His right, "whatever you did to the least of these, you did to Me."

We continue to pray for those that have no where else to go, for Karly and Karline and for her family, for all that God is doing in that neighborhood, we give Him praise. Through all of the hardship and suffering we continue to hear the praises of His people.
When you finish reading this, please say a prayer for Haiti...for hearts willing to hear, that He puts someone in their path, for those that need food, water and shelter, that He puts someone in their path, and for those that are the path...strength, courage, and boldness to share the news of a God that loves them and will never leave them.

Photos below...
Posted by Colleen and Jussi at 8:15 AM No comments:

We have a God-given calling through His Word directing the church to meet the needs of the people in order to show His great love. A generation of people is rising in the church and effectively reaching out to others, while another generation sits warm and content in their homes. Pick a side! Kay Arthur

I was loving the encouragement she provided as a call to our youth, but honestly I am not a youth and struggle with "Am I too old to be dropping everything and doing missions??"

Jussi and I continue to prayerfully consider 2010. We know that God is not finished with us, we know HE has plans and a purpose for us...then why are we so insecure about the future.

The news of Haiti's quake devastated our souls, wrecked havoc with our minds and played out a million different scenarios as we waited for news. Thankfully for us, our Haitian family and friends were unhurt physically. The wounds of the hearts will continue in the hearts and minds of everyone, nationals and those that have come to help for years to come. Please pray for those that are still working on adrenalin to help as much as they can, to guard their hearts and their sleep.

To be switching gears and planning for Africa, post Haiti earthquake is still a difficult one for us to digest. We have continued to keep in contact with those opportunities in Africa and ask for your prayers as we seek His will for our lives.

Will try and keep you updated as the process continues and will also be posting up some pictures and writing a story of HOPE about what God is doing in Haiti, stay tuned for "With These Hands".
Hebrews 11:1 (NIV) Now faith is being sure of what we hope for and certain of what we do not see.
Posted by Colleen and Jussi at 6:27 AM 1 comment: