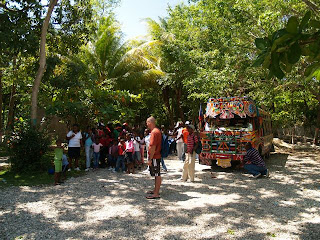 Yesterday we had another first, riding on a Haitian bus filled with loud music blaring and bodies crammed in like sardines, some hanging out the door, and some on the roof. Collectively I think we were 50 altogether, smiling and excited to be going to the beach. We heard the children early as their excitement forced many to rise before the sun and their excited giggles were sweet incense of the day to come. Karly had said one child said she was afraid to go to sleep in case she didn’t wake up and miss beach day, and another said he would never sleep, he would just wait up until morning. We were excited but not as much as the kids.


The morning brought the making of kettles of food, containers of plates and cups, an Igloo cooler full of juice, chocolate chip cookies and enough chicken to feed an army. Little did we know we were taking an army? We loaded the food, the coolers for water and ice (we bought along the way a huge chunk on the side of the road) we loaded the children and when we thought we are full, we couldn’t possibly fit another, and we loaded twelve more. In Haiti we ask how many people fit in a tap tap and the answer is “one more”. So loaded to the max, three extra big boys (LOL) on the roof, two more big boys (aka young men) hanging out the door and off we went.

The drive was about two hours, the kids well behaved and the music blaring…..okay that might have been the one thing I could have done without! We arrived at the beach and everyone changed, although the earthquake have flattened the wall and most of the buildings, there was a wee wall for the girls to change behind and one for the boys. A few of the mom’s came along for supervision and to help with feeding the group. In the morning when we arrived we ate cold spaghetti with ketchup is a Haitian regular meal. Jussi who has never in his life eaten cold pasta, ate it, smiled and said what happens in Haiti stays in Haiti. In other words I guess I still cannot get him to eat pasta salad at home! 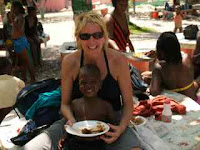 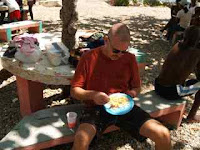 Soccer games, skipping, games of checkers, and visiting with each other for a bit then it was time to hit the water. Literally hit was a good word, if we had paid for splashing it would have cost an arm and a leg. Many of the children could not swim so the big boys stayed in waist deep and kept guard aka a splash zone. The small ones played in the sand. 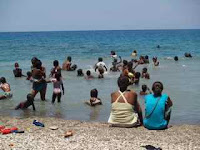 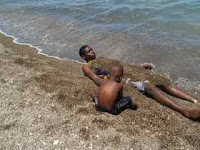 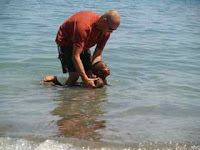 We went swimming and then lunch of rice and beans, veggies, fried bananas and the army of chicken. I think most of everything was consumed and Carline also fed a few young neighborhood children that arrived after hearing all the noise. More swimming and just after 4pm we piled into the bus again, tired and half dry, they cranked on the music and most of the little ones fell asleep. It was a great day and we wished we could do it again. For one day the kids forgot about life without school, life in a tent city and the fear of aftershocks. Tired, hot and dusty from the ride home we savored the little things like a bottle of coke and a fan in our room!

PS School all over Port Au Prince is supposed to resume Monday, PTL!

A Big thanks came from all the kids as well as prayer thanking God for their day and to bless those that had made it possible. Jussi and I say thanks as well. PS Sorry for the little photos, internet here is jammed with dozen plus computers and I cant' seem to stay connected...I get bumped off all the time...anyone know a fix?? 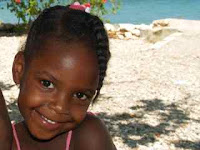 Posted by Colleen and Jussi at 6:05 PM