Rising from the rubble...stories of His provision 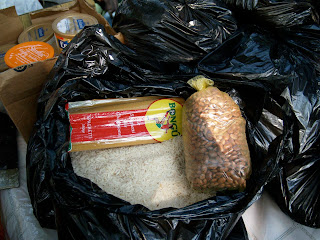 In Haiti rising from the rubble of post earthquake are stories of triumph, stories of tears, people working together and people struggling to comprehend where to go but holding their heads up and carrying on. There are the stories of giving, of receiving, the telling and re telling of amazing rescues and many times how each day is a gift. Today a lady I had met a few days ago was asking me if we were going home today. I told her no, but that had to make a call and I would return and tell her which day we were to leave the Villa. When I returned a few minutes later she was in tears. I told her I was sorry I had to make the call, and asked her to tell me what was wrong. She had told me that she considered me a friend, and had practiced her best English and told me “ I love you pretty baby girl”. I asked her to tell me what I could pray for her, and she shared her husband had died and one of her children was still in the hospital. I understood it to be a grown child, but I also understood the power of motherhood protection, and the love that I have for my husband. She was in her late sixties and so I sat with her for a while, listening to the story of a child sick, and a husband lost. I listened to her anguish as she shared how the blocks had hit her in the shoulder, back and leg but she was saved with little pain. I told her that I would continue to pray for her and that I would tell her story to my friends back home and they too would pray for her broken heart and her family. I read to her from my Creole bible Psalm 133. She told me she would pray for me and that because I had brought her a cup of coffee one morning when she was tired from traveling, that she will remember me. I smiled to myself because the exact opposite story had happened to me. 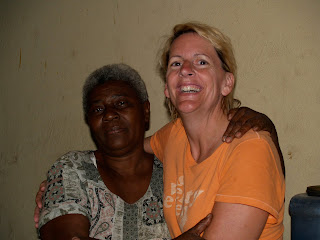 On Saturday morning (just after I had brought her coffee) we hiked up the mountain to meet some people and distribute tools and food that had been given by another team. We left from the Villa on foot and by the time we got to the first goat path I thought, well not so bad, need to pace myself LOL. After taking a wee detour to look at some property we finished our hike and sat and took in the beauty of the view. Flushed red from heat and exercise I am sure I looked rough, but the people were waiting, so the work began. After giving out baby formula to moms, rice, beans, and spaghetti to families, we gave out the tools, all the names from a list that had been made before we arrived. It was a great time to be the hands of those that had given money and not been able to come to Haiti to see the families it had helped.

I spoke with a few people and asked to see their gardens, went further up the mountain, took pictures and received a few stories to write about. (pics and stories later this week) We gathered up our packs, said goodbye, and shared that we would pray that we could come back sometime in the future and that we would leave that in God’s hands. Just as we were leaving an older women motioned for us to stop at her tarp shelter. She had beautiful strong eyes, weathered lines on her face from hard work in the sun, hands that told the story of a life with very little, and a large toothy smile. She wanted to give us a present of bananas but I worried that she had so little. I needed to remember don’t take away her blessing. 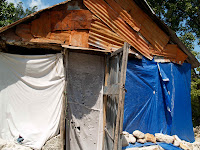 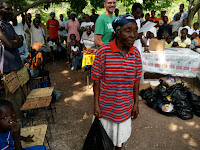 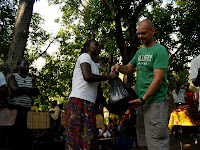 Further down the road we stopped for a drink and I realized after hours of hiking I was a little sugar low and needed something to eat. Imagine my happiness when I realized we had fresh bananas! As we neared the Villa I was so thankful for the snack that I asked Bab if he could take some money to her for us. I asked him to tell her the story how God used her to give me a snack when she had so little, and that I needed it. I wanted her to know that the Lord had blessed her with this money because of her faithfulness and that He would care for her, if she cared for others. I was a bit teary at the thought of what had just happened, and in turn we blessed one of the ladies from across the road from the mission with the extra bananas. I thought the day could not get any better but then I hear two days later that the small job of getting up from the table and getting someone a cup of coffee had multiplied the blessing. I pray for both these women that it will be like the story of Zarephath and her handful of flour that God multiplied because she gave. (1Kings 17 v 10- 16) 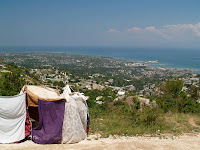 I would like to dedicate this story to a friend from work named Bill that told me weeks ago before I left that he wouldn’t go to Haiti but was glad that going to Haiti was my thing. Bill passed away suddenly on Saturday from a brain aneurysm; please pray that God will give his wife and family peace and comfort at this time, and join me in thanking God that going to Haiti is MY thing!

Posted by Colleen and Jussi at 3:45 AM