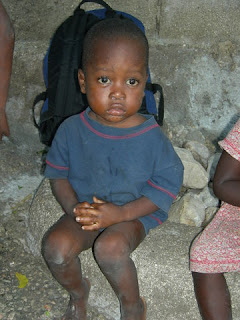 Yesterday as we were heading up the hill from the mission to the work site we saw something we have seen before but it had us smiling. We were driving and these two little boys about two or three years old were on the side of the road, outside the gate of a home. What caught our eye was that they were way too young to be out on the side of the road alone. I guess I could say by North American standards they were way too young to be on the side of the road, but this is Haiti. So as we drove up, I thought how cute, dressed only in t shirts with bare feet and bums, I marvelled at the grace of God to protect children in Haiti. To protect them from vehicles that drive crazy, protect them from being abducted, a NA mom's worry when children venture out alone, and disease and hygiene as they stood in the wet mud in bare feet. Well it didn't take long to not feel sorry for them because as we drove by, they both threw rocks at the vehicle. So then we were laughing and saying oh my gosh, they had learned that young. To see the smiles as the vehicle passed by and the little boy smile of mischief, we quickly realized for kids in Haiti it is no different than lil boys back home. When Jussi was young he hid in a ditch with his friend Keith and they were throwing snowballs at vehicles, that time he hid and his friend ran, another time Jussi tried to slingshot a rock under a moving vehicle and missed and it hit the truck. So I guess boys will be boys in Haiti and forty years later throwing things at vehicles is still free game for little boy entertainment.
Posted by Colleen and Jussi at 4:48 AM