Seeking out the lost.... We have recently been burdened for a man who lives along the road to Fort Jacques. We first started noticing him sitting in the bush a few weeks back. After about 5 days of seeing him sitting alone in the underbrush, with a shirt wrapped on his head, I started asking how we could help. Soon after we noticed he was sitting in a garbage bag or sleeping curled up in a garbage bag, in the morning and still there at the end of the day. Not only were we saddened by the state of living without shelter, the fact he was alone but we ached for the God knowledge to know who he was, what he needed, or how we could help. After asking around we were told that possibly our helping would be a detriment to him and that he may feel threatened and move. So we watched and prayed and looked for signs of community involvement or helping. In any country mental illness is so misunderstood so we felt that until he attempted to make himself shelter we would just let him be. We prayed for his safety, for someone in the community to be watching out for him and that the Lord would reveal how we could help. The Lord gave us wisdom to wait until we saw signs of residency and or makeshift shelter and then we would get him a tent and a blanket.
Praise the Lord this morning I noticed a make shift plastic bag shelter tied to a few bushes. We asked our Haitian staff what they thought about giving him a tent and blanket and got the go ahead from John at GLA to give him a blessing. We stopped by on our way home from the work site in the rain. He was mostly unresponsive to questions of what he wanted to keep, but when I opened the sleeping bag to reveal a blanket his eyes told the story. He did not want the tent, so we put the waterproof fly over the pieces of plastic, told him they were all gifts and said goodbye. I was sorry we had to disrupt his space to talk to him but aside from eyes that told the depth of his hurt, it seemed he was welcoming the gift. The statistics in the years to come of those whose hurt, pain, anguish and despair will tell the story of the earthquake and the post traumatic stress that accompanies a tragedy of this magnitude.
Please continue to pray into this man's life. We do know he is being helped by someone, I noticed a small bowl of food and a spoon. Although I cannot explain my hearts burden for those here in Haiti like him in words, knows that it breaks my heart. I am thankful that I do not need to understand the whole picture but be available when God gives us direction.
(This is once we gave him a sleeping bag and put a tent fly over his pieces of plastic) 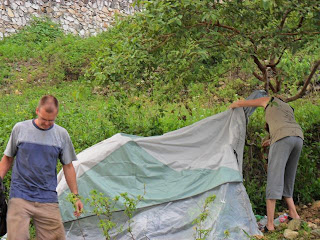 Posted by Colleen and Jussi at 7:37 PM