In the last few weeks we have been somewhat tested and prompted about a feeling that something new was to come to us. Many things throughout the last few weeks have brought us to our knees asking why, and to tears saying it doesn't make sense. God has been showing us things and sharing His strength in our weakness. This weekend it culminated into some sense. Our hearts for many years have been burdened for the children who are indoctrinated or enlisted into war because quite simply, someone thought they were dispensable. We knew that the sick feeling, the anxiety shakes vs the holy spirit goosebumps meant something was going to be revealed.

(sidenote) War is something I do not want to debate, it is not something that I  try to understand but I will try to advocate for the over 250,000 child soldiers currently serving in over 30 different countries that are being robbed of their childhoods.
We attended the book signing for the Honorable Lieutenant-General Romeo Dallaire's new book,  They Fight Like Soldiers They Die Like Children. Dallaire talked about the signing of the International Rights of the Child Protocol that was signed by over 58 governments pledging to do their part to eradicate the use of children in armed conflict but since that time there has been little done to stop the recruiters around the world. He shared about the history of his involvement in Rwanda and the genocide that took place in front of his eyes. The hurt, the pain and the nightmares of witnessing children with tattered uniforms, eyes glazed from drugs that carried machine guns and his ache for the ethical question "Do you kill children who kill?" You could have heard a pin drop as he described the effects of watching 800,000 people die in 100 days, slaughtered because of their ethnicity. His inability to act because he was in Rwanda as a peace keeper and not fighting a war. It was sobering at times but in amongst his humorous anecdotes, he was talking about change and immobilizing others to get involved, he called upon each person to be part of the solution.

This is where the sense of what we had been feeling came in. Many months ago, I wrote to Dallaire, asking if he had any plans to come out to the west coast to speak, this is before I knew about the book., just with the knowledge of his involvement in Rwanda. Jussi and I had been burdened for the child soldiers over the years and although we had spent all our time in Haiti working in a different role, we had applied and were working with Child Voice International to serve in Uganda. The email to Dallaire was personally answered with  "Hi Jussi where do you live?  and a personal email address to respond. After several emails back and forth we were given the news he was coming to Victoria. To make a long story short we bought tickets and showed up anticipating hearing him speak. Jussi choked up as he  stood before his hero, shaking his hand, as I thrust the book towards him for a signature and tried to make a phone camera capture the moment.  One word "IMPACT"
This man had seen more than we could imagine and he wanted to chat about Haiti because our friends had shared we had served there. We could only nod and smile and thank him and basically stumbled on our words, if there ever comes a time when you have a chance to meet someone you admire, stop and breathe. I do not think we did. On our way home, we cried and tried to make sense of where we felt we could help, we felt so burdened, we physically felt heavy. Sunday morning as we prepared for church we continued to share how we were feeling and where we thought we could help. Still no mountain top experience or catapulting vision.
Wth heavy hearts we hustled off to church. We started into worship and watched 100's of youth enjoy the excitement of freedom and promise but we were both teary at the injustices of our world. (youth conference weekend) As we sang and the tears flowed down my cheeks I praised His name and  felt completely powerless and direction less..if that is a word. You see the interesting part is I didn't think I was looking for direction, I was not searching, nor was I discontent with my life. As a prophetic word was spoken to me, I sat humbled that God would speak to me, to encourage me, I can't remember all that was said; I do not know the worship leader that brought the message but I know above else when I was feeling completely inadequate He reminded me that He was going to use me and suddenly transformed me from a teary mess to a teary mess with a direction. I stand before each of you asking for prayer. I do not know what to pray for us personally but pray that globally countries around the world would hold those accountable for using children in war. That consequences would be enforced by all 58 countries that said they agreed that children should not be involved in armed conflict. Pray for Romeo Dallaire as he shares around the world about his new book and the Child Soldiers Initiative. 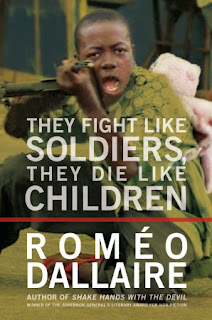 Romeo shared when people asked how they could get involved that "you" needed to get your boots dirty, he shared "you need to see it for yourself".  As christians we know the signature of God is on each and every child and person in the world. A promise that regardless of where we are right now, He has a plan and purpose for our lives, He knows our struggles, He knows our fears, all that we have done and HE LOVES US ANYWAY. Pray for the children, that someone will reach them with the gospel and share the love of Jesus to them. I want  to get my boots dirty...how about you?

http://www.romeodallaire.com/
Posted by Colleen and Jussi at 5:24 PM